Yes, that’s right. We said Groundpug Day. Since we haven’t seen any groundhogs lately in our neck of the woods near Asheville, North Carolina, we at the Inn on Mill Creek decided to check in with our own hibernation expert and one-half of our innpug duo, Csaba (pronounced “Chubba”), to see if he would act as our weather predictor this morning. It could be that the Inn on Mill Creek is a very relaxing place to be, or it could be that Csaba is lazy, (we like to think it’s a combination of the two), but he is very much an expert at napping.

Csaba,when asked if he wanted to go outside, appeared to be only slightly interested in waking up out of his hibernation on Brigette’s office chair (note the one-eyebrow raise and yes, that is his tongue, which is a good indicator of Csaba’s hibernating behavior): 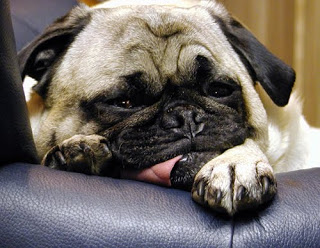 Word has it that the nation’s favorite groundhog, Punxsutawney Phil, saw his shadow today, predicting six more weeks of winter. Csaba — or Pisgah Csabapugga as he is known on Groundpug Day here in Pisgah National Forest — woke up out of his winter slumber (OK, he hibernates year-round) and did not see his shadow, predicting an early Spring for the North Carolina mountains. Exciting news! It helped that we had a foggy and beautiful misty mountain morning. Here we have captured Csaba in a rare moment of walking in the snow…this is not a snow loving dog, so he’s happy that most of it is quickly melting away, hopefully another sign that Spring is just around the corner:

We’re interested to see how accurate Csaba’s prediction is, knowing that Phil the groundhog is correct only 39% of the time, according to weather experts. Csaba is quite competitive when it comes to predicting weather based on hibernation patterns. He is also extremely competitive when it comes to seeing who can fall back to sleep the fastest after predicting the weather. If sleeping were a sport, Csaba would win a gold medal.

2 thoughts on “Groundpug Day Results Are In”