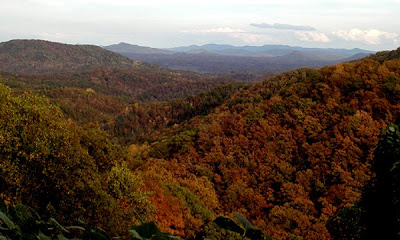 The Point Lookout overlook…the greenway trail is 1.5 miles from the Inn

As we zip through week 7 of Autumn, Mother Nature is wrapping up this year’s fall foliage season with the bronze and copper of maples and oaks at our elevation (2,300 ft). Most of the colors are past peak at higher elevations, giving a new look to the mountains as the lines on the ridges become more pronounced.

A lot of our guests are enjoying the Point Lookout Trail, a 3.5-mile greenway for bicyclists and pedestrians. The overlook for which the trail is named looked pretty spectacular a few days ago (we took the photo above of the Point Lookout view on October 27). And the drive down our road through Pisgah National Forest between Ridgecrest and the Inn is still very pretty, with a myriad of colors as some maples have been slow to change and have created a range of red and gold, orange and green. This is the first fall that the colors around the Inn on Mill Creek have been this varied at one point in time since we arrived in 2007.

This is the perfect time of year to put on some layers and listen to the Autumn-patented sound of leaves crunching under your feet as you walk on a nature trail, while watching the last of the fall colors drift down leaf by scarlet leaf all around you. For the end of the fall color season, we always recommend driving scenic Route 9 south out of Black Mountain to Chimney Rock Park, part of the “Gorge-ous” Hickory Nut Gorge area. The colors peak a little later than in our neck of the woods. The Park has several trails, including the Four Seasons Trail, which is great for a walk through a hardwood forest, and the Skyline Trail, which takes hikers to the highest point in the Park (aptly named Exclamation Point).