It’s party time at Biltmore and you’re invited! From February 8 to May 27, 2019, a fabulous costume exhibit called A Vanderbilt House Party is happening at Biltmore Estate in Asheville. You won’t believe the detail of the clothing and who helped put the exhibit together. Think Downton Abbey… ready to learn more? 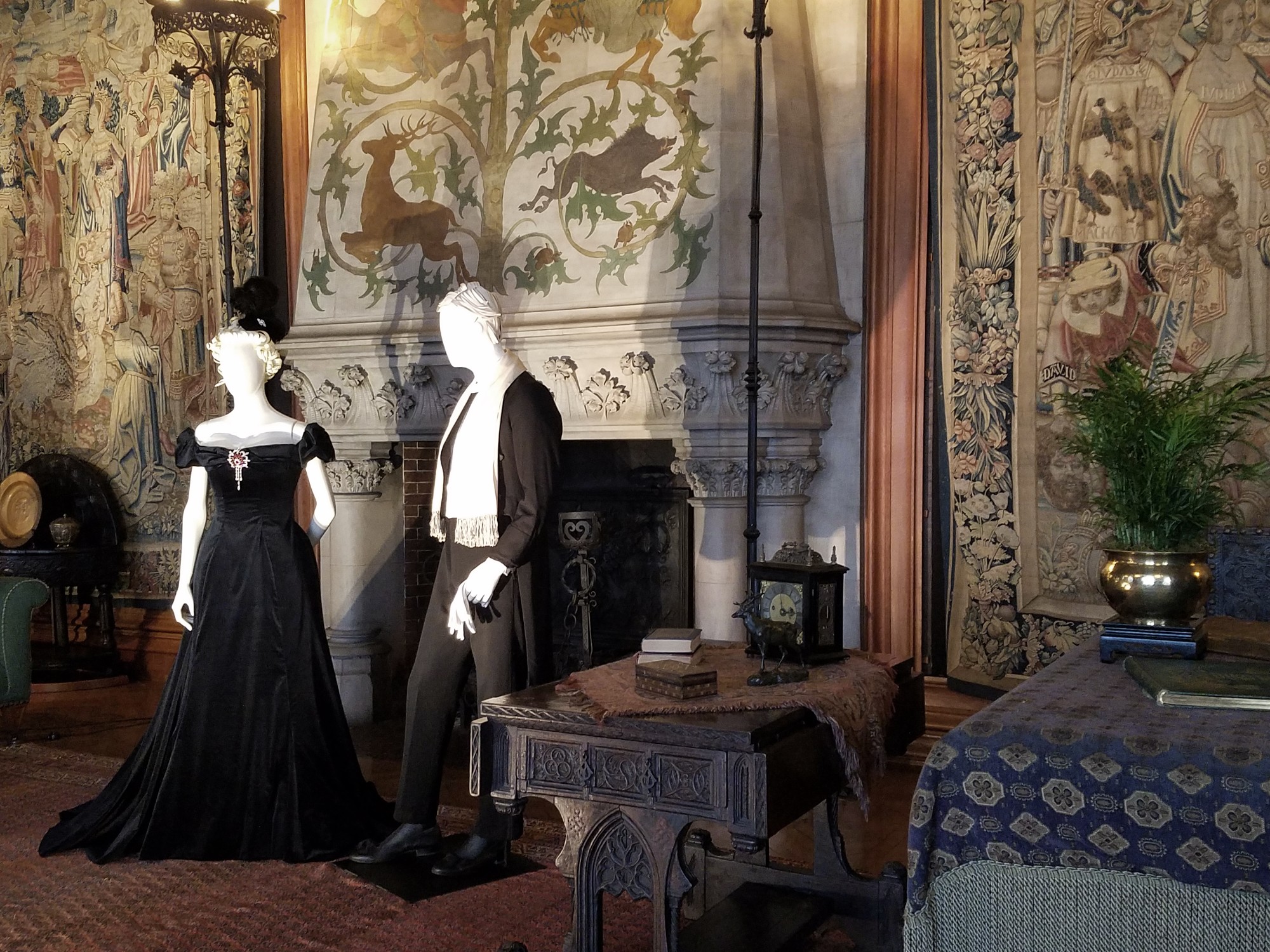 A Vanderbilt House Party features detailed reproductions of clothing worn by Biltmore’s original owner, George Washington Vanderbilt, as well as his wife Edith and their daughter Cornelia, plus many of their close family and friends who would visit the French chateau-style Biltmore House during the early 1900s. 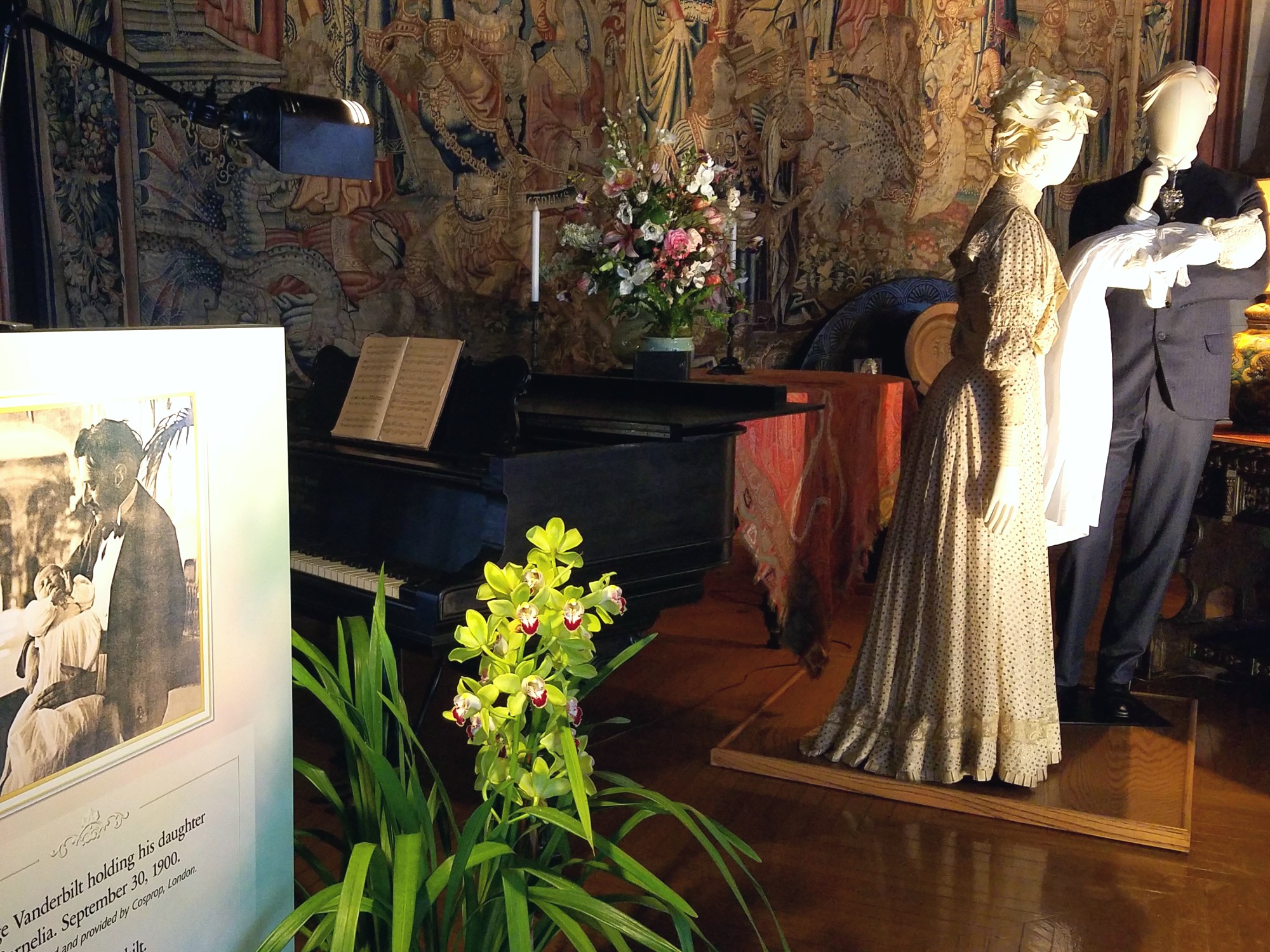 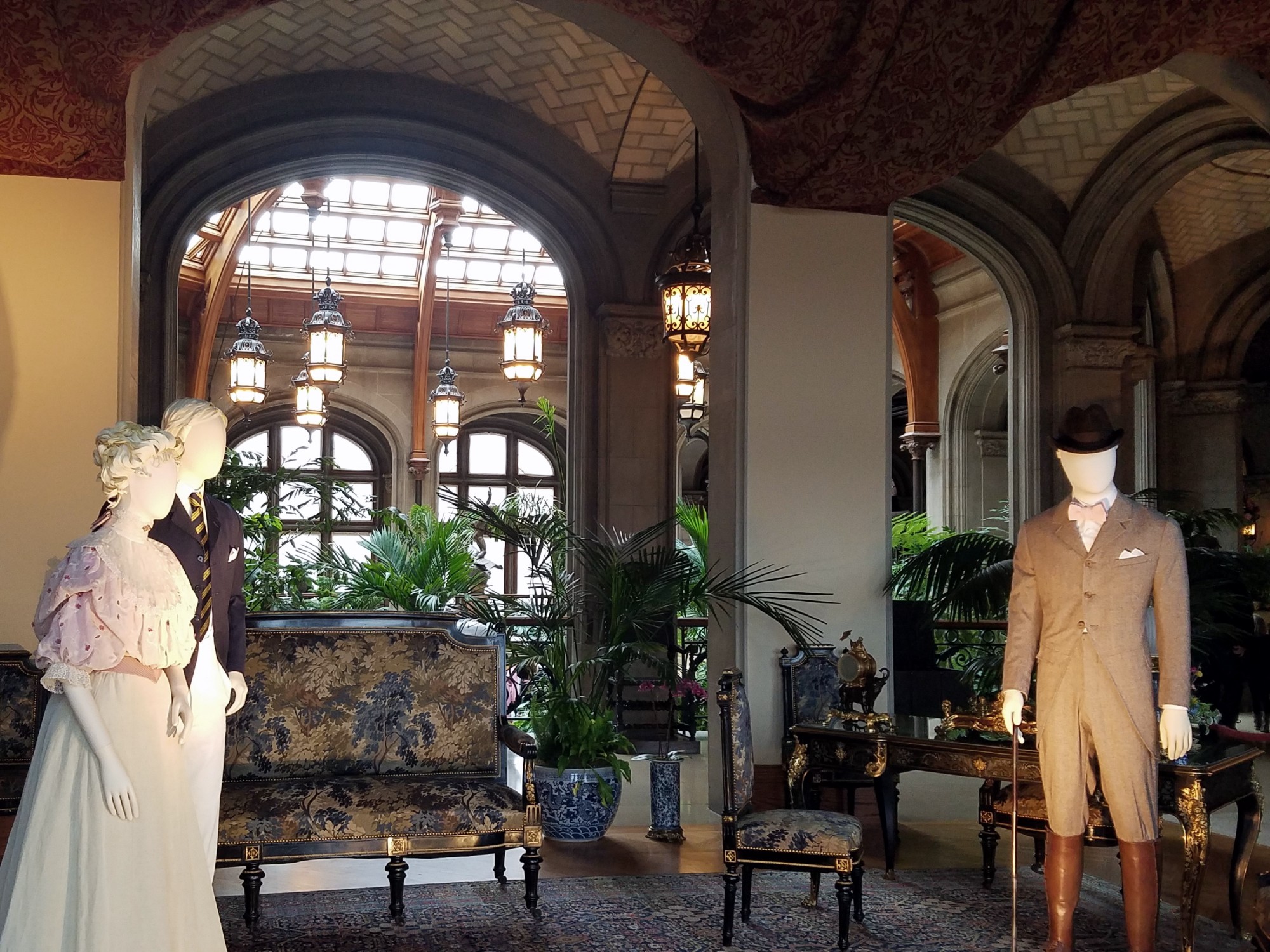 This time period was known as the Gilded Age in America. Imagine attending one of the lavish dinner parties the Vanderbilts hosted, with guests like the author Edith Wharton, artist John Singer Sargent, and novelist Henry James. Imagine making yourself at home in the spacious third floor guest hall, rubbing elbows with artists, writers and other interesting characters of the early 20th century.

What would you wear?

You don’t have to guess because intricately designed dresses and suits are on display throughout Biltmore House, reproduced from the clothing seen in photographs of the Vanderbilts and their friends taken during the Gilded Age. And who helped with putting these costumes together? None other than Academy Award winner John Bright and his London-based costume design company, Cosprop, which specializes in designing and creating period clothing for television and film, as well as exhibitions. You might recognize their work from Sense and Sensibility, Downton Abbey, and Gosford Park.

What is really special about A Vanderbilt House Party is the storytelling aspect of the exhibit. This is particularly the case with the audio guide created for this exhibit ($12.99), which you can get at Biltmore to supplement your self-guided tour and which we highly recommend! 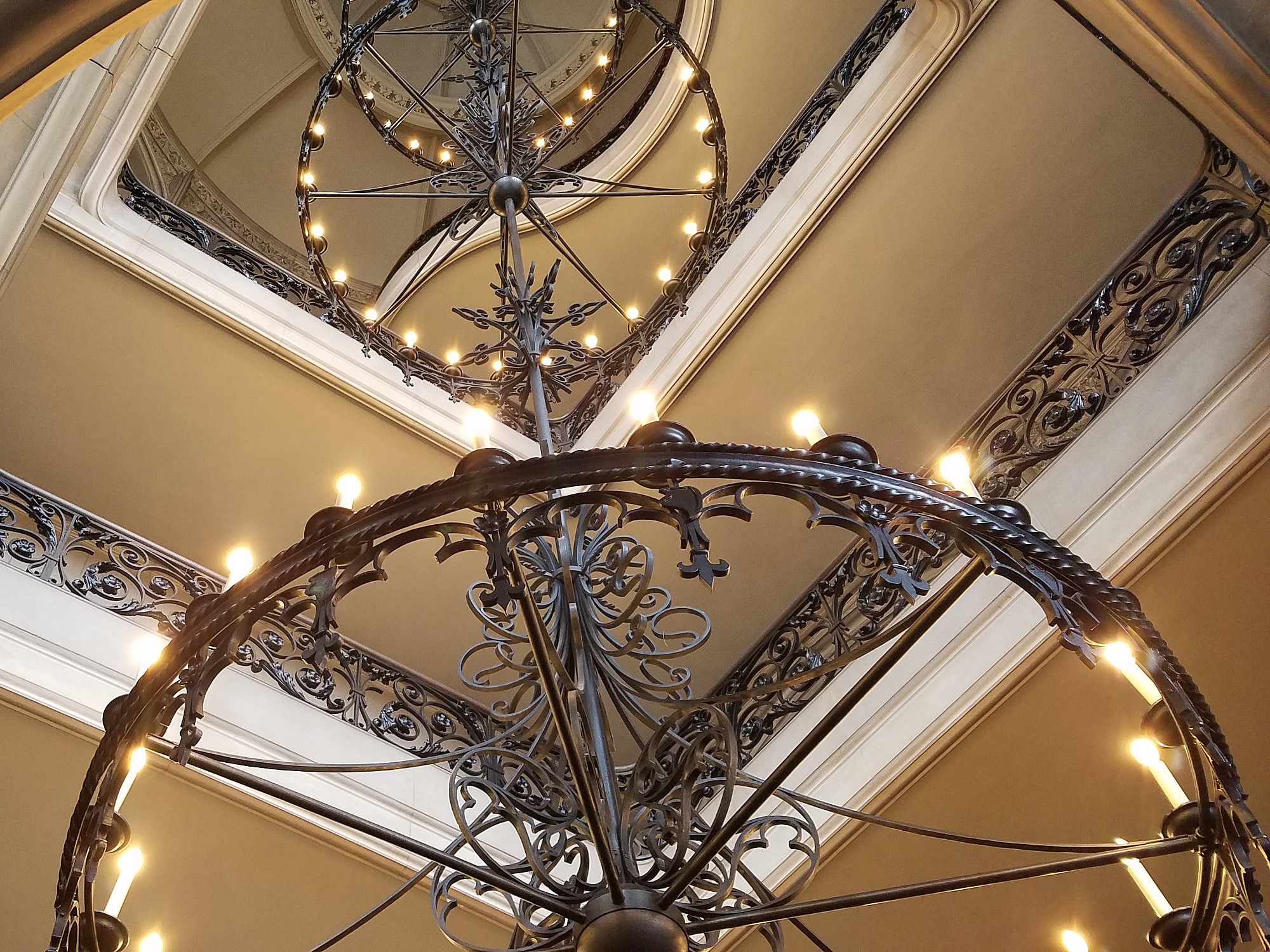 With the audio guide, you explore each extravagant room as everyone prepares for one of the house parties thrown by the Vanderbilts in the early 1900s. Hear one of the guests, an opera singer, practicing in the Music Room. Walk from Mr. Vanderbilt’s bedroom into the sitting room with one of the house staff, Harvey, and listen while he, Head Housekeeper Mrs. King, and Mrs. Vanderbilt discuss additions to the guest list and what the dinner menu will be. 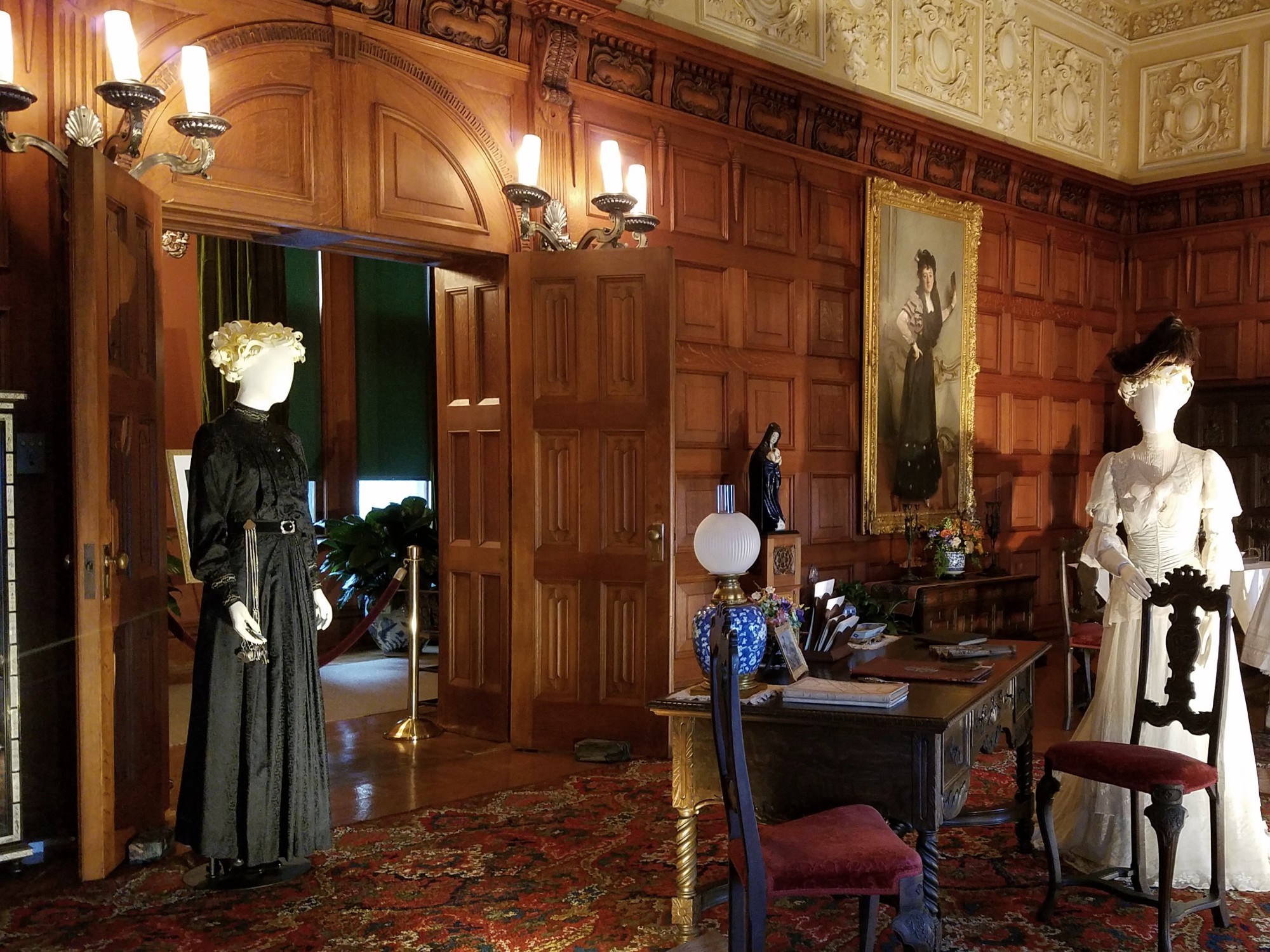 Head toward the guest rooms accompanied by one of the house boys while he chats about how his father helped build Biltmore House. Listen to party guests in the third floor hall read clever poems they’ve written in the Biltmore guest book. Try to keep up with Mrs. King, the revered head housekeeper, as she walks busily down the tiled hall to the main kitchen, making sure the staff are all up to speed on their duties for the day and evening.

Your tour through the 175,000-square-foot home culminates with a walk through the seven-story dining hall, where some of the guests have gathered and where the gorgeous table is set for a celebratory dinner. This is by far one of the best audio guides that Biltmore has put together. Worth every penny. 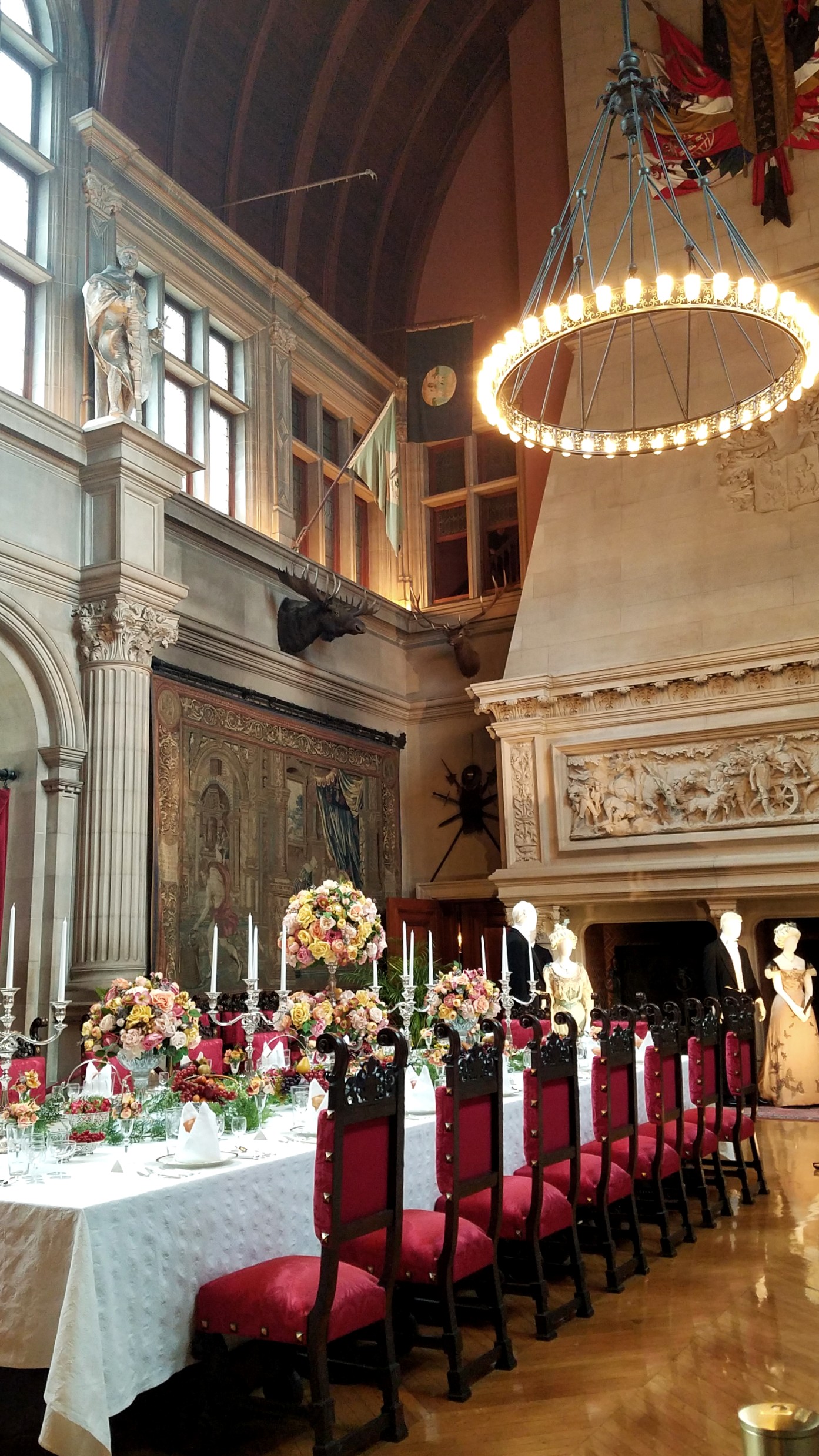 And you can save some pennies by taking advantage of discounted tickets during your stay at the Inn on Mill Creek B&B. Our Biltmore daytime admission tickets are good for any day PLUS the following day at no extra charge and are always discounted from the one-day gated price. Your ticket includes a self-guided tour of Biltmore House, a visit if you like to the Winery (complimentary wine tastings!) and Antler Hill Village on the estate, access to all the estate’s shops and restaurants, plus the expansive formal gardens, park-like outdoor spaces, and trails. You can easily add Biltmore tickets to your stay when you book direct at www.innonmillcreek.com or call us at 828-668-1115. 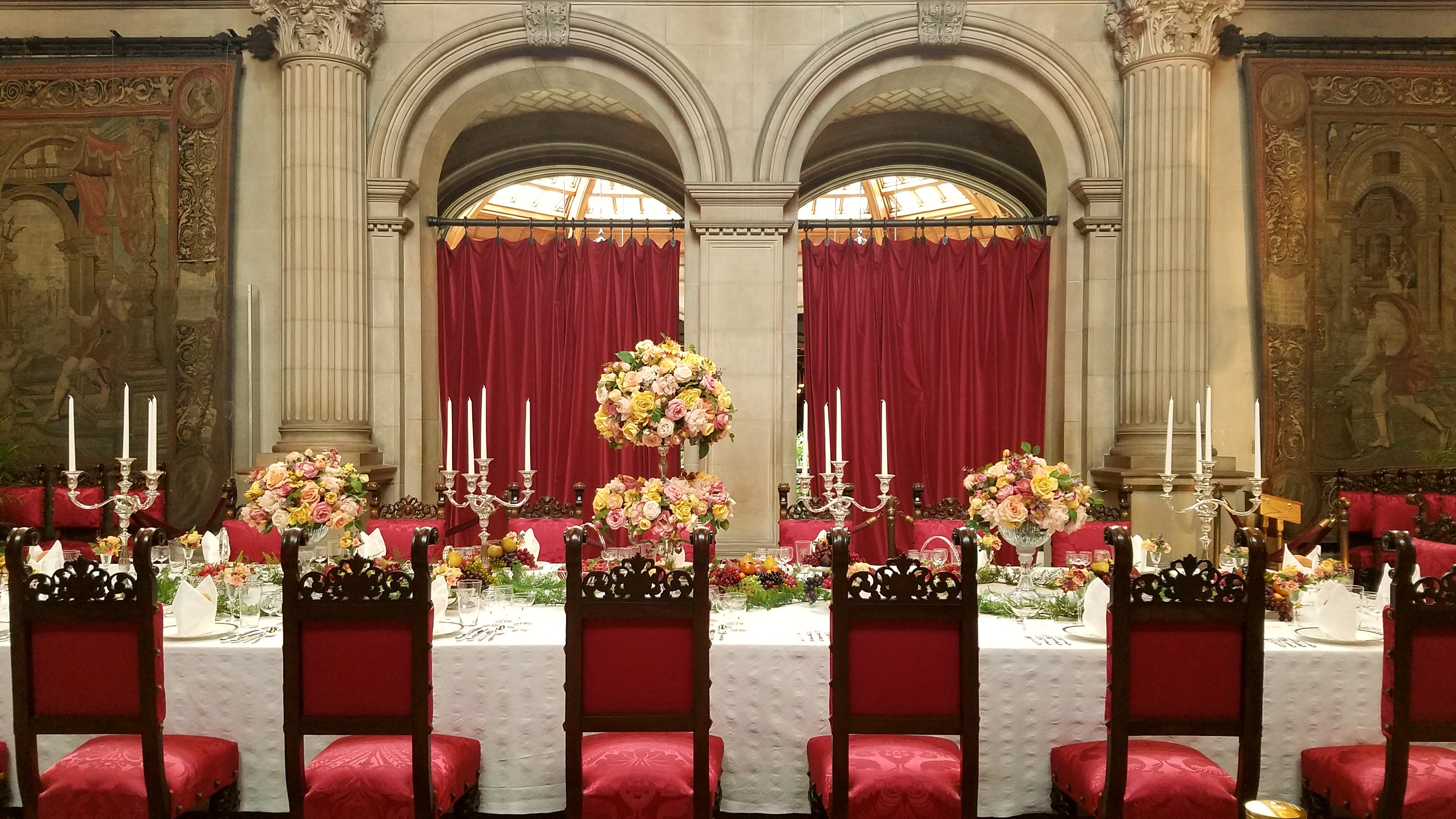