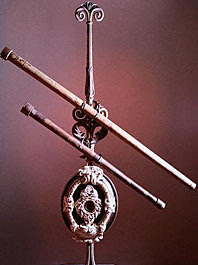 We love stargazing here at the Inn on Mill Creek because it’s so easy to do with very little light pollution. So, we’re very excited to note that 2009 — marking the 400th anniversary of Galileo’s use of the telescope (above) to study the skies — has been designated by the United Nations as the International Year of Astronomy. (Thanks to Mark and Eileen for sharing with us an article from BLDGBLOG about Galloway Forest Park in Scotland announcing its plans to become Europe’s first “dark sky park.” What a great idea!)

It’s very easy to celebrate the International Year of Astronomy: simply look up in the evening or wee hours of the morning and enjoy the night skies! Here are a few dates to keep in mind if you’re interested in the year’s celestial happenings in the northern hemisphere: