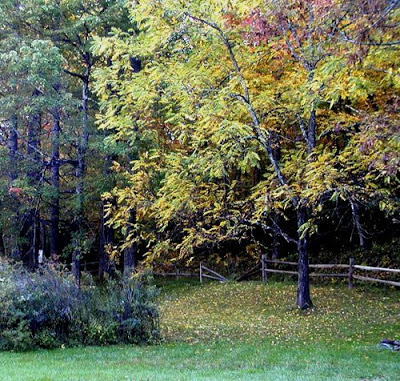 So, we’re less than two months away from the magical fall foliage season here in western North Carolina. We thought we’d take a moment to answer some frequently asked questions that we get around this time of year from people who are beginning to plan their trip to the area and are hoping to maximize their leaf peeping…

1. When does the fall color peak in the mountains of North Carolina?
This is a challenging question, because there are so many different elevations and microclimates in the mountains, so fall color looks its best at different times based on where you are…see the next two answers for more!

2. How long is the fall foliage season in the mountains of North Carolina?
The fall color in North Carolina stretches over a long period of time, starting in late September at the highest elevations in our mountain range — the Black Mountains — all the way to early November at the low elevations and points south of us. It is very cool to see the red and orange hues start appearing at the tops of the mountain peaks and then, like a slow motion waterfall, the color flows down the mountains as the fall season continues. [We may have to do a time-lapse camera montage this year for Pinnacle Mountain, which we can see from Mill Creek Road.] Essentially, for six weeks or more, you will be able to see color somewhere within a 20-minute drive of the Inn on Mill Creek.

3. When do the fall colors look the best at the Inn on Mill Creek?
Peak week at the Inn on Mill Creek seems to be between the third and fourth weeks of October. During the past two years, the fall foliage peak has been close to Halloween at our elevation (2,300 feet) near the town of Black Mountain. But we can never say for sure exactly when the peak will be. A lot of factors contribute to the timing of the fall foliage peak. But, rest assured, you won’t have to go far to see awesome colors if Pisgah National Forest is still somewhat green when you’re visiting the Inn (see answer #4).

4. Where are some great places to go to see fall colors?
At the beginning of the fall leaf season in the North Carolina mountains, some great places to visit are the high peaks along the ever-scenic Blue Ridge Parkway. The Black Mountains have six of the ten tallest peaks in the eastern United States, and that includes Mt. Mitchell. The gorgeous views from the Parkway of the higher elevations make for a great day trip. Bring a jacket because the temperatures will be cooler than at the lower elevations.

As the season gets on its way, Grandfather Mountain and Linville Gorge to the northeast, and Mt. Pisgah and Graveyard Fields (no worries, it’s not a graveyard) to the southwest are sure to put on a show. Then in mid- to late-October come the areas around our elevation, such as the towns of Asheville, Black Mountain and Montreat to the west and Old Fort to the east, as well as at the North Carolina Arboretum just south of Asheville. Great hiking and other outdoor opportunities abound. It’s also a great time to visit Biltmore Estate. Later, toward the end of October and beginning of November, you’re sure to see fall color at Chimney Rock Park and the Hickory Nut Gorge area.

5. What is the weather like during fall foliage season?
From late September through early November, the mornings and evenings can be rather chilly, but the daytime temperatures tend to be fairly moderate. If the weather forecast calls for sun (which it usually does), then your best bet is to wear layers so that you don’t get too hot under the afternoon sun shining in the Carolina blue sky. This is especially important if you’ll be out hiking or driving where elevation changes mean frequent drops and rises in temperature. It might be 70 degrees at the Inn on Mill Creek (2300 feet), and five miles north, near Mt. Mitchell in the Black Mountains (6694 feet), it could be 50 degrees at the same time of day, while at Chimney Rock Park and Lake Lure (1200 feet), which are both located a half hour south of the Inn, it could be 78 degrees. And remember, our fresh mountain air can be rather dry, so packing some lip balm isn’t a bad idea either.

We hope that answers some questions you might have about the fall color season in our area. If you can join us at the Inn on Mill Creek this fall, please let us know if we can help you find leaf peeping opportunities while you’re here!