Just like last year, Mother Nature rolled her blanket of clouds over the night skies and kept us from checking out the Leonids meteor shower. And just like last year, Brigette said, “No worries,” and took her galaxy gazing to the internet for some galaxy identification with Galaxy Zoo 2.

Formerly Galaxy Zoo (without the “2”), the newest Galaxy Zoo site has amateur astronomers focused on classifying “the nearest, brightest and most beautiful galaxies.” 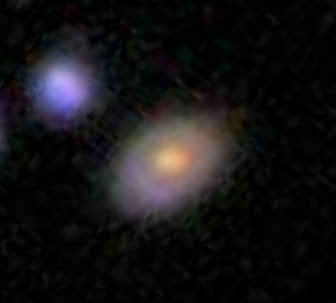 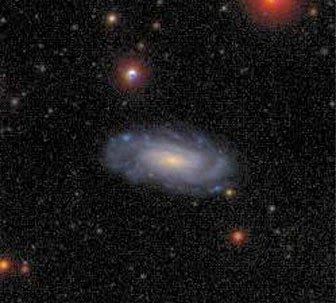 Click here for background on the Galaxy Zoo project

The biggest change in the new classification system, Galaxy Zoo 2, is that instead of just being asked whether a galaxy is spiral or elliptical, and what direction a spiral galaxy’s arms are going, we’re now asked specific questions. Classifiers indicate whether galaxies have certain features, such as a bar through the center of the galaxy, or whether a bulge in the center of a galaxy is round or square. There’s also the fun question, “Is there anything odd?” with options that include a ring, a dust lane or a merger with another galaxy.

Personally, Brigette’s favorite new feature of Galaxy Zoo 2 is “galaxy wars”, where classifiers are asked to pick the winner between two galaxies in terms of specific features, for example, which galaxy has the most prominent spiral arms. It can be tough sometimes to pick a winner. (Click the pic to enlarge) 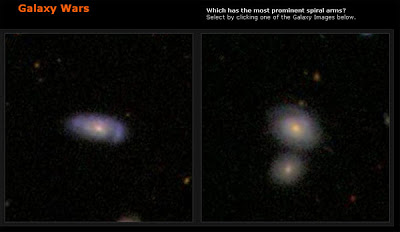 With more in-depth questions, the classification process is a bit more involved, meaning Brigette has only classified 92 galaxies so far. Millions more to go…thanks, Mother Nature, for a cloudy night. 🙂