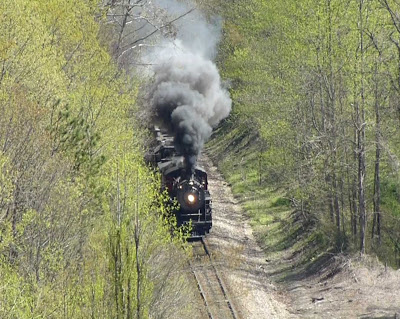 The beautifully restored Southern Railway Steam 630 locomotive made a visit to our neck of the woods during the weekend of April 20-21, 2013. The excursion train, owned and operated by the Tennessee Valley Railroad Museum (TVRM), is part of Norfolk Southern 21st Century Steam Program. [Photo below of the 630 near the Inn on Mill Creek taken by Bob Elliott] 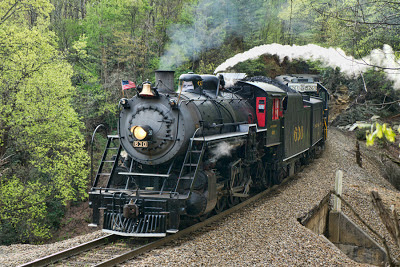 The 630 was built for the Southern Railway in 1904, and is a 2-8-0 locomotive, meaning the wheels are arranged with two leading wheels on one axle, followed by eight powered and coupled driving wheels on four axles, and no trailing wheels/axle behind the driving wheels.

At the time of its retirement in 1952, the 630 was serving as a freight locomotive in the mountains of Western North Carolina on the Murphy Branch, which runs from Murphy Junction (across the French Broad River from Asheville) to Murphy, NC. After her retirement, the 630 was sold to the East Tennessee and Western North Carolina Railway. The Southern Railway reacquired the 630 in 1968, putting her back into service, as a passenger excursion train this time. The 630 ran until 1989, the last six of those years on loan to TVRM. In 1999, Norfolk Southern donated the 630 to TVRM, which spent ten years restoring her. She returned to regular service as an excursion train in 2011.

For this particular event in April, the 630 made four roundtrip excursions between Asheville and Old Fort, NC, passing by the Inn on Mill Creek a total of eight times during the weekend (nine if you count when the train was being moved to Asheville for the start of the trips!).

The Inn on Mill Creek Bed & Breakfast is located near a very interesting stretch of rail called the Loops of Old Fort, which has no RR crossings, but rather seven tunnels and several trestles as it curves 13 miles over a distance of three miles in the mountains. It also curves past the Andrews Geyser more than once. Here’s the 630 as she headed over the trestle located at the north end of the Inn’s property:

We had some wonderful guests that weekend, including Bob and Suzie, who have a special connection to the Southern Steam 630: Suzie’s grandfather was the conductor on the train, and was working in that capacity when the 630 was retired in 1952. Suzie’s grandfather worked for Southern Railway until 1957. Below is a picture of the train at the time of its retirement. Mr. Beard, Suzie’s granddad, is second from the left. The back of the photo reads: “Last trip Eng 630 June 6, 1952 to Brevard NC. Exchanged for diesel.” [photo courtesy of Suzie Elliott] 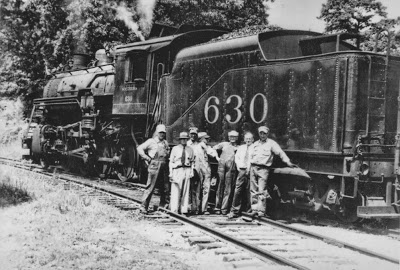 We were also fortunate to meet a lot of railfans and talented photographers that weekend, including Butch Adkins. Below are just a couple of his many excellent shots of the train. These were taken as the 630 headed through Jarrett’s Tunnel and Lick Log Tunnel, the two of the seven tunnels that are closest to the Inn [photos courtesy of Butch Adkins]: 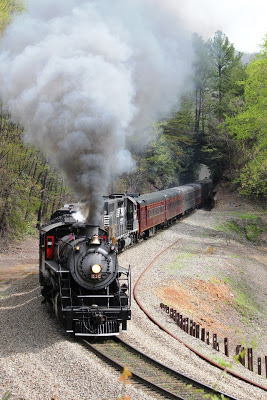 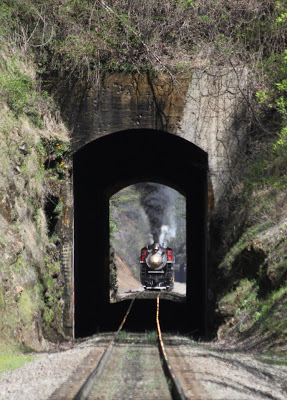