Don’t let the name scare you: Rattlesnake Lodge is a neat destination hike off the Blue Ridge Parkway just six miles north of Asheville, North Carolina. The hike has many points of interest and takes you through a pretty area of the mountains.

Who owned Rattlesnake Lodge? None other than Dr. Chase P. Ambler. A well-known physician in his day, Dr. Ambler was not only passionate about healing his tuberculosis patients, but was also devoted to forestry conservation. As one of the founders of the Appalachian National Park Association (est. 1899), Dr. Ambler was at the very front of a movement to create a national park system, and many credit him among others with the eventual establishment of the Great Smoky Mountains National Park — a peak there is named after him — as well as Pisgah National Forest that surrounds Asheville. In fact, the first tract of national forest land purchased under the Weeks Act of 1911 is located in the Curtis Creek Recreation Area in Old Fort, not far from the Inn on Mill Creek B&B, and it’s marked by a sign that dedicates the land to Dr. Ambler’s memory. 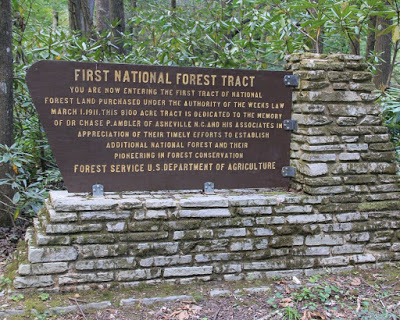 Curtis Creek Recreation Area near the Inn on Mill Creek

So now that we know who Dr. Ambler was, let’s talk about his lodge: Rattlesnake Lodge, constructed during 1903-1904, was Dr. Ambler’s summer home for his family when the kids were out of school, although Dr. Ambler liked to go up to the lodge during the winter and spring as well. Regarding the name Rattlesnake Lodge, the story goes that Dr. Ambler would pay anyone a $5 bounty (a week’s wages at that time), if they brought him a rattlesnake. The ceiling of the lodge’s living room was adorned with rattlesnake skins! 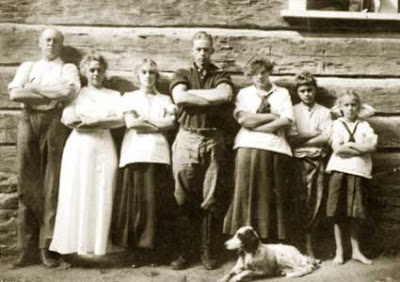 The lodge was on more than 300 acres of forested land, and included the main lodge, a carriage house (for parking the carriages before you walked or rode your horse to the lodge), stables and a horse barn, caretakers’ cabins, a spring house, a tennis court and shallow swimming pool, terraced gardens, and storage buildings. Dr. Ambler eventually acquired 1,300 additional acres around the lodge, selling it to the government in 1916, which then made it part of Pisgah National Forest.

After the death of Dr. Ambler’s wife in 1918, it is said that Dr. Ambler never returned to the lodge, (which burned down in 1926). In 1920, he sold the remaining 318 acres, which was bought and sold a few more times before being acquired by the Blue Ridge Parkway, which is part of U.S. National Park System.

The trail system around the lodge is now a portion of North Carolina’s Mountains-to-Sea Trail (MST). This section of the MST is maintained by the Carolina Mountain Club, which counts Dr. Ambler as one of its six original members. Quite serendipitous! 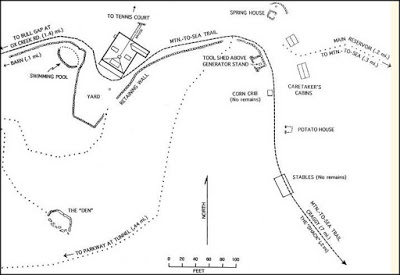 So now, you can hike on the MST to the site where Dr. Ambler’s Rattlesnake Lodge stood and check out the cool ruins, as well as see the beautiful woods that Dr. Ambler wanted so much to protect. The hike is a moderate three miles through hardwood forest. Expect to see wildflowers if you are there in late spring or summer, into the fall season. At an elevation of 4,400 feet, it’s a great hike in mid-October when the fall color show is in full swing. 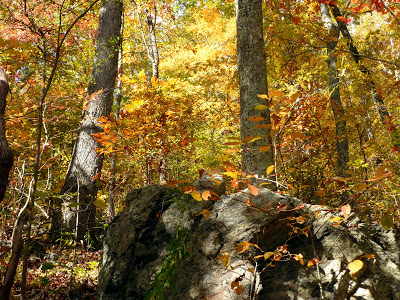 Along the Mountains-to-Sea trail near Rattlesnake Lodge (October 22, 2014)

To get there, take the Blue Ridge Parkway north from Asheville near the Folk Art Center (milepost 382). Travel a little over six miles, then turn left onto Ox Creek Road (after that left, you’ll then turn right after 0.2 at the t-intersection to stay on Ox Creek Rd). You’ll see a small parking area (fitting 4 or so vehicles) on the right after about a mile. The MST is blazed with white circles.

A full description of the hike can be found at: www.hikewnc.info/besthikes/blue-ridge-parkway-section-4/rattlesnake-lodge.