You may have heard about the rain we had last week…actually, it was ten full days! We were fortunate not to experience any flooding at the Inn, and while the Blue Ridge Parkway closed for a couple of days for workers to clear the roadway of any fallen trees, it is back open and offering great views of fall foliage at elevations between 3,500 and 4,500 feet.

Waterfalls are always a good choice after a rainfall, but take note of the increase in water volume and be very careful on waterfall trails after it rains. For perspective, take a look at Linville Falls (less than an hour from the Inn on Mill Creek) on a normal day: 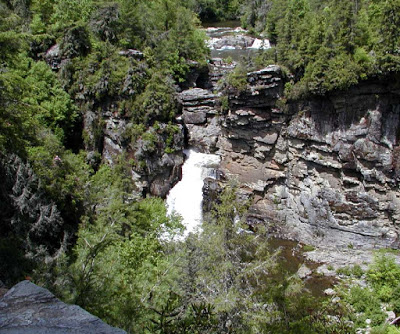 Linville Falls, the highest volume waterfall in NC on a normal day

Then check out this dramatic photo of Linville Falls taken by the talented Danny Marshall on Sunday, October 4, after the crazy bout of rain we had: 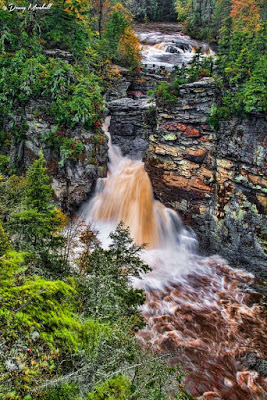 Right above where the waterfall wraps around a cut in the rock and plunges downward is an observation area along the main hiking trail, so that gives you an idea of the size of this waterfall. Amazing, right?!

Heading into mid-October, here are our destination picks for fall color hunting:

So what’s happening in terms of fall color in our neighborhood? Here at the Inn on Mill Creek B&B inside Pisgah National Forest (2,300 feet), the color is much further along than in previous years — a nice surprise! — but fear not, late October guests, there is still a lot left to go. 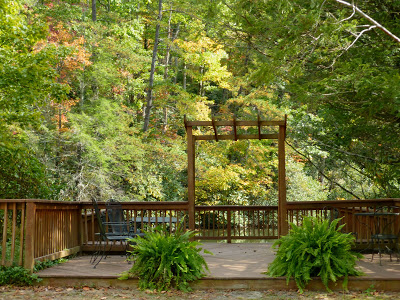 The arbor deck at the Inn on Mill Creek…relaxing! 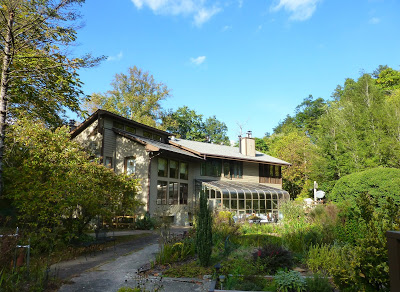 The dogwoods and sourwoods are doing major fall color duty, as are hickory, sassafrass, birch and beech. The tulip poplars once again (5th year in a row) ask us to keep our expectations low as they fade into bronze yellow and then quickly brown. At least they’re providing good “leaf crunching” on the ground, always a nice fall sound! Maples are just getting started and were perhaps delayed a bit by the rain, so we are expecting some nice color out of them later in the month.

We’ll see you next week! Until then, for even more fall color reports, check in with our friends at RomanticAsheville.com and Blue Ridge Parkway Daily.