The February 2016 pick for our 12 Months of Birding at the Inn series on the blog is a cool-weather resident of Pisgah National Forest around the Inn on Mill Creek,  providing a little bit of spunk to the forest during an otherwise quiet wintry season. Let’s meet the Ruby-crowned Kinglet. 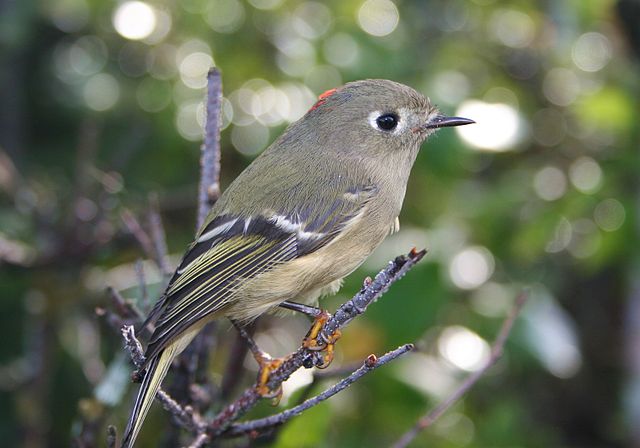 What we love about the Ruby-crowned kinglet, other than its very appropriate name, is its active nature. What this tiny bird lacks in size, it more than makes up in its boundless energy. Always on the go and constantly fluttering through the shrubs looking for an insect snack, it’s a fun challenge to try to spot the greenish grayish Ruby-crowned kinglet. Try to watch for a frequent flick of the wings and heavily contrasted black and white wing bars. Note that the crazy bright flash of red on the male’s crown is not always visible.

We tend to see Ruby-crowned kinglets most often when they arrive in late October and just before they head to their summer homes up north, which is generally late March. But that could be because we ourselves are outside more during those times. If you’re at the Inn on Mill Creek in late fall or through the winter into spring, you might just see this little ball of energy, too.