We kick off our 12 Months of Birding at the Inn series for 2016 with a favorite bird of ours: the Brown Thrasher. With its striking yellow(!) eyes, white chest speckled brown and noticeable singing voice, this bold bird really makes an impact. 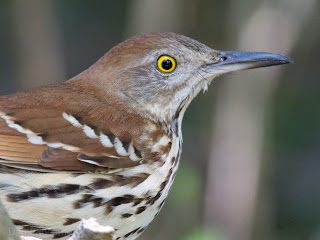 The Brown Thrasher is in the same family as the Catbird and the Northern Mockingbird, and they can sing some seriously complicated tunes, often imitating the songs of other birds. Twice. They can do more than 1,100 different song types…quite impressive, don’t you think? In fact, according to the Cornell Lab of Ornithology:

At least one early naturalist thought the Brown Thrasher’s song was
underappreciated, writing “Much of the [acclaim] which has fallen to the
Mockingbird is really due to the unperceived efforts of the Brown
Thrasher. It is the opinion of many ornithologists that the song… is
richer, fuller, and definitely more melodious than that of polyglottis” (the Northern Mockingbird).

When looking for a Brown Thrasher at the Inn on Mill Creek, keep an ear out for the singing on high tree branches, but also pay attention to noise on the ground. Even though they’re fairly elusive, they do like to rummage through foliage on the ground in search of their favorite meal (insects) and we often spot them around the bushes near the birdfeeders as well as on the north side of the property near the Oak Leaf Room, where there is a nice bit of dense vegetation, including rhododendron and mountain laurel thickets.

Stay tuned to our monthly bird list…February’s bird is quite a gem!