During the summer months, we’re profiling the four state parks near Asheville, NC, as part of Inn on Mill Creek’s nod to the 100th birthday of the North Carolina State Park System in 2016. Our July feature is Chimney Rock State Park and its iconic 315-foot granite namesake. Currently, the way to get to the top of Chimney Rock is a set of 499 steps. So…up, up, up, we go. Let’s do this. 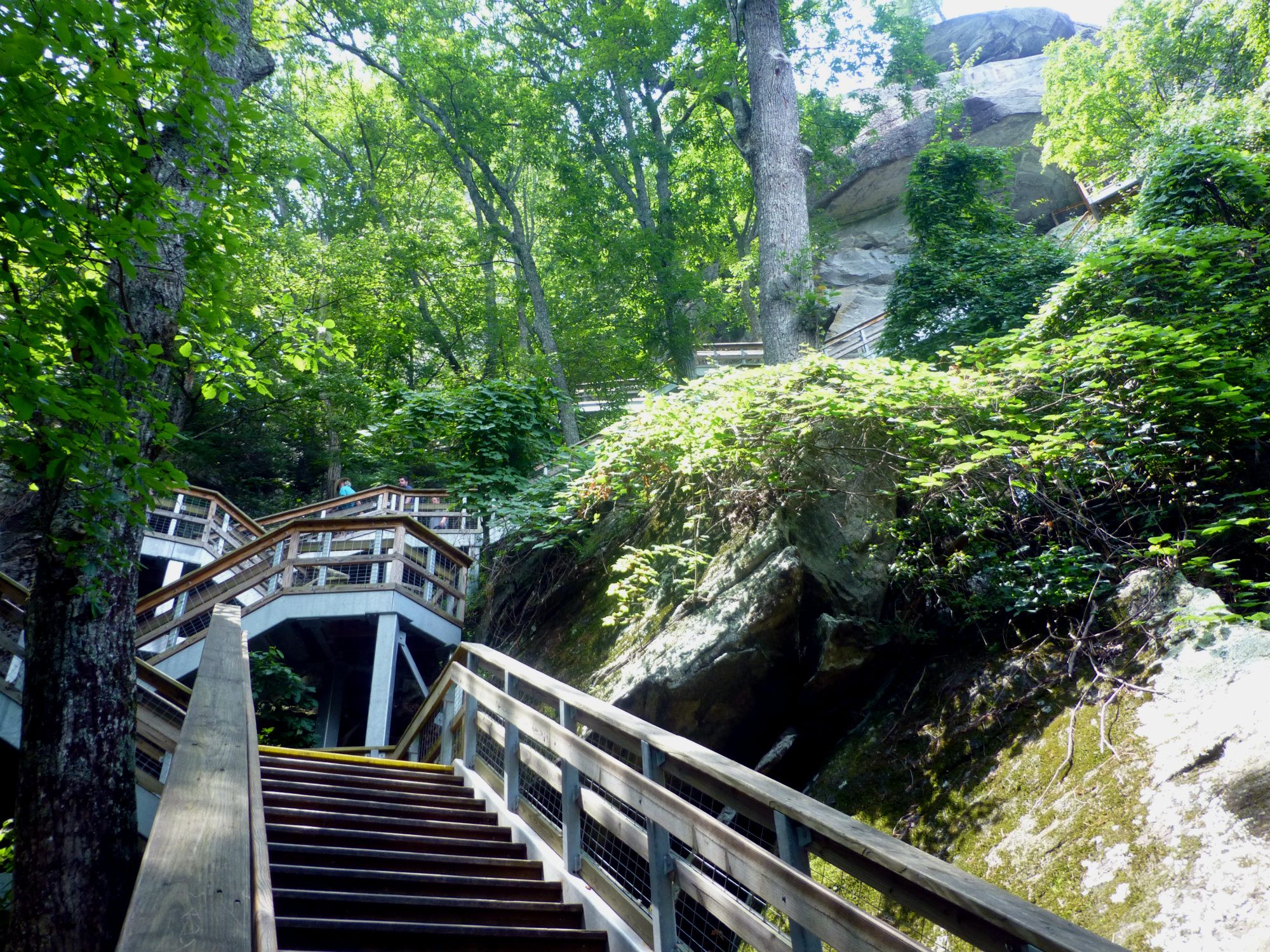 The Outcroppings Trail…wear comfortable shoes, bring water, and then prepare for a rewarding workout!

But first…let’s get to know this beautiful state park a little better: In 1902, Dr. Lucius B. Morse purchased 64 acres, including Chimney Rock, with financial assistance from his two older brothers. In the early 1900s, the entire mountains region was known for its healthful climate, attracting many who were suffering various ailments. Visitors often ended up being so enchanted by the area that they stayed. Dr. Morse, who was suffering from tuberculosis, was one of those people.

Dr. Morse got the idea of creating a public park while admiring the view atop Chimney Rock. Back then, the way to the top was by riding on a donkey. 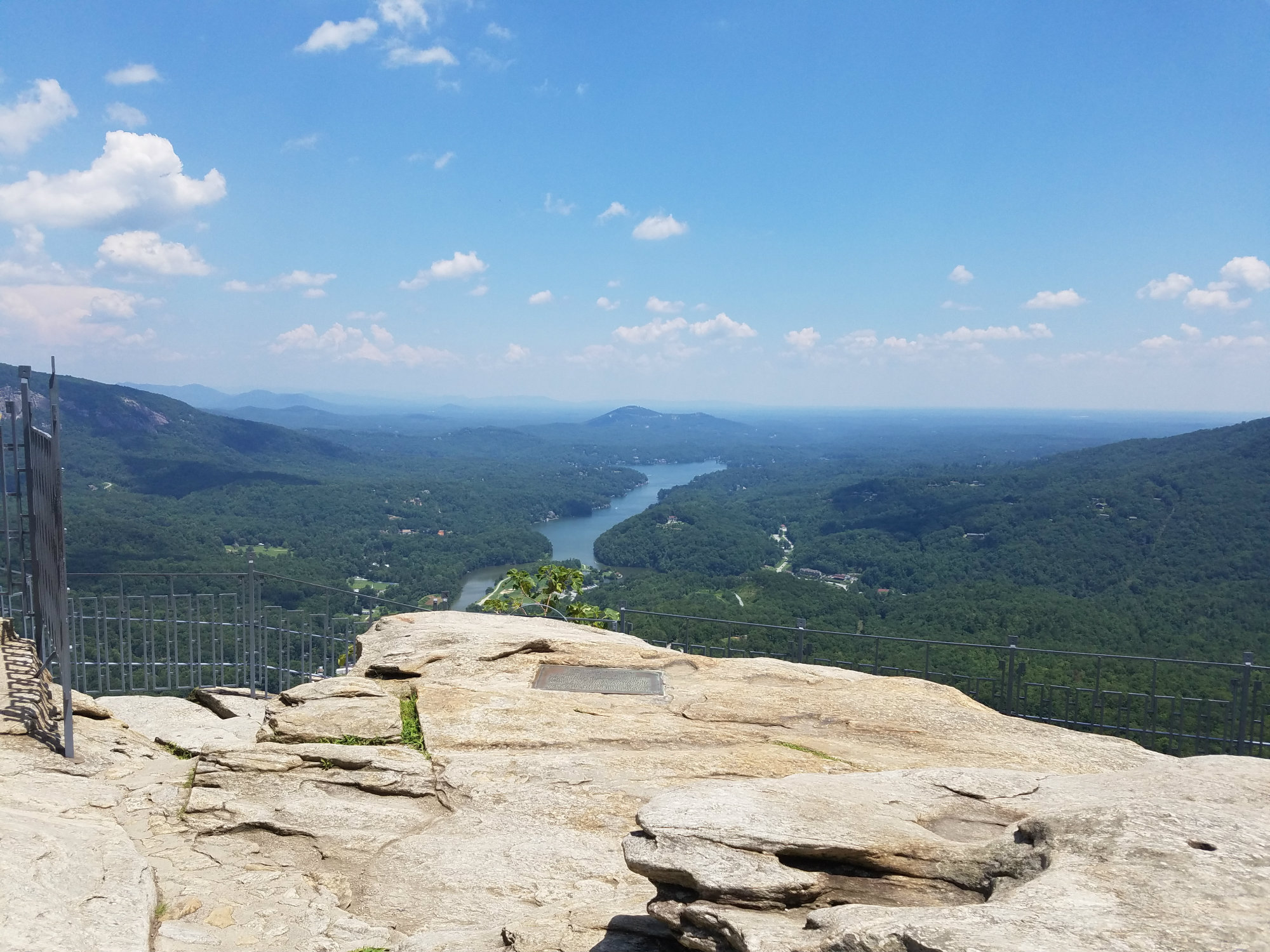 The view from the top of Chimney Rock (donkey not required, just some good old-fashioned leg power)

After purchasing Chimney Rock and the land around it from a gentleman named Jerome Freeman, Dr. Morse and his brothers had a three-mile road constructed to the base of the chimney, and trips to the top by donkey were replaced by stairs. Dr. Morse passed away in 1946, but improvements continued under the leadership of his brothers, and in 1949, an elevator was installed inside the rock. Over the years, members of the Morse family continued their work as stewards of the now 996-acre Chimney Rock Park, installing trails and scenic overlooks, renovating buildings, adding guided hikes and educational programs led by botanists and ornithologists and building a Nature Center. The park even became a bit of a celebrity in the early 1990s when parts of the movie Last of the Mohicans was filmed there. 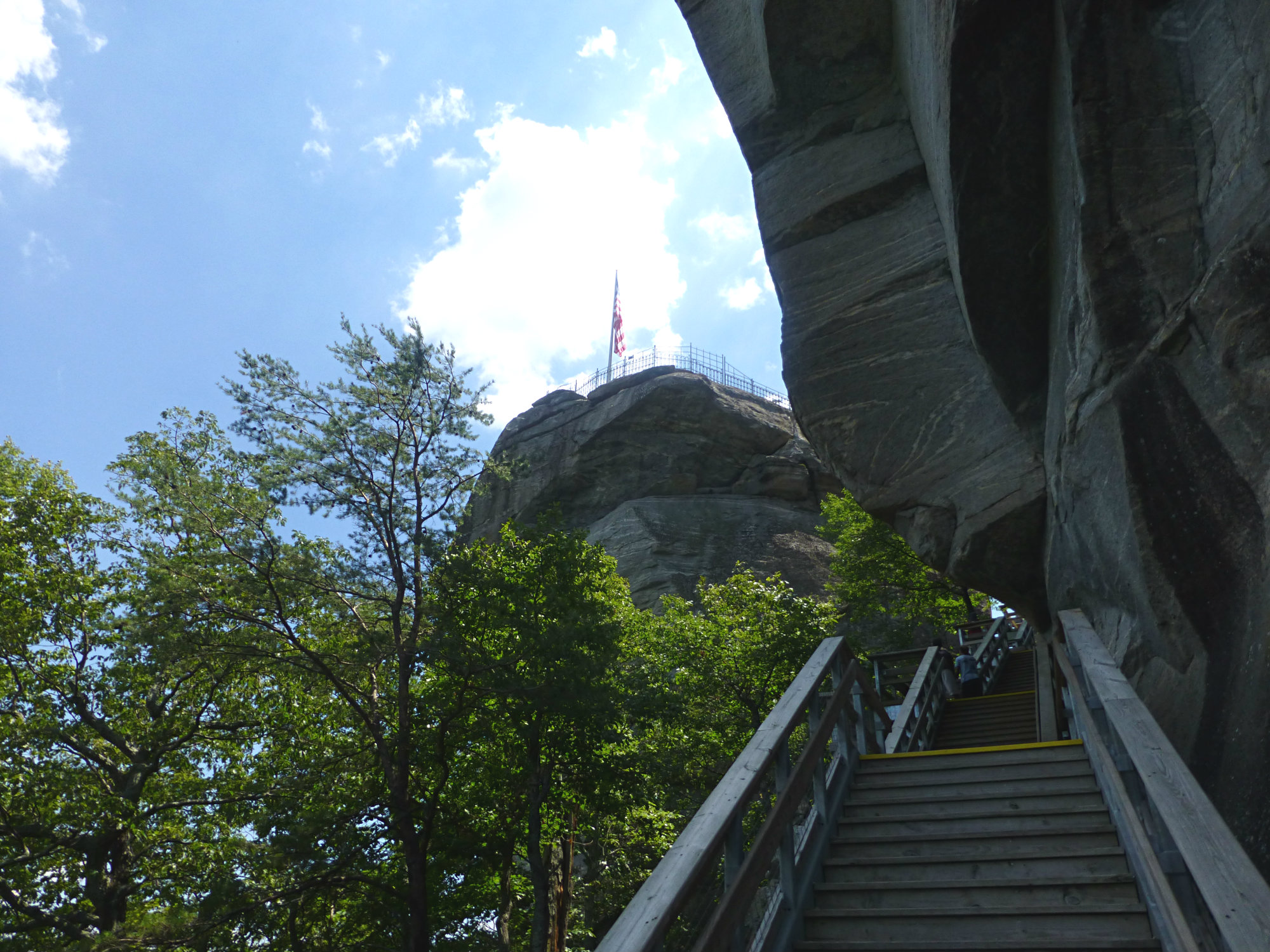 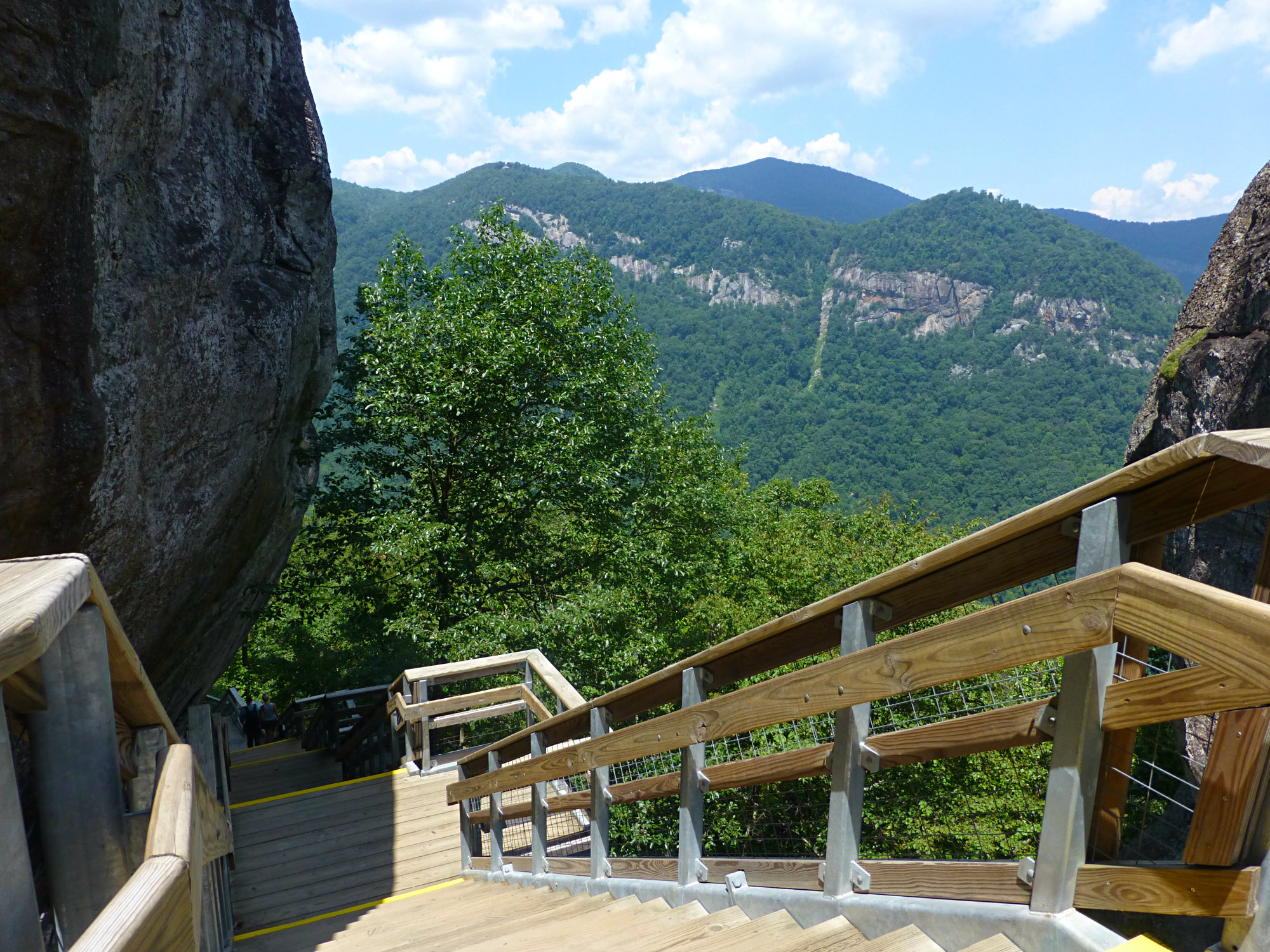 While ascending (and descending) 315 feet, you really get a sense of the majesty of the area. It feels like every time you take a break — there are places to rest every 12 feet should you need it — the landscape changes and there is a new view to behold. And to add variety, the Outcroppings Trail also offers the options of checking out the Birdhouse to learn about the different birds in the area, viewing an educational display on bats, and going into the very cool (figuratively and literally) Gneiss Cave, which is named for the Henderson Gneiss, the type of granite in the area. You can also bypass some of the stairs on the way up or down and walking/crawling through the “Subway”, a tunnel through large boulders and you can also hang out in the Grotto, created when a joint developed in the gneiss and broke off part of the rock. 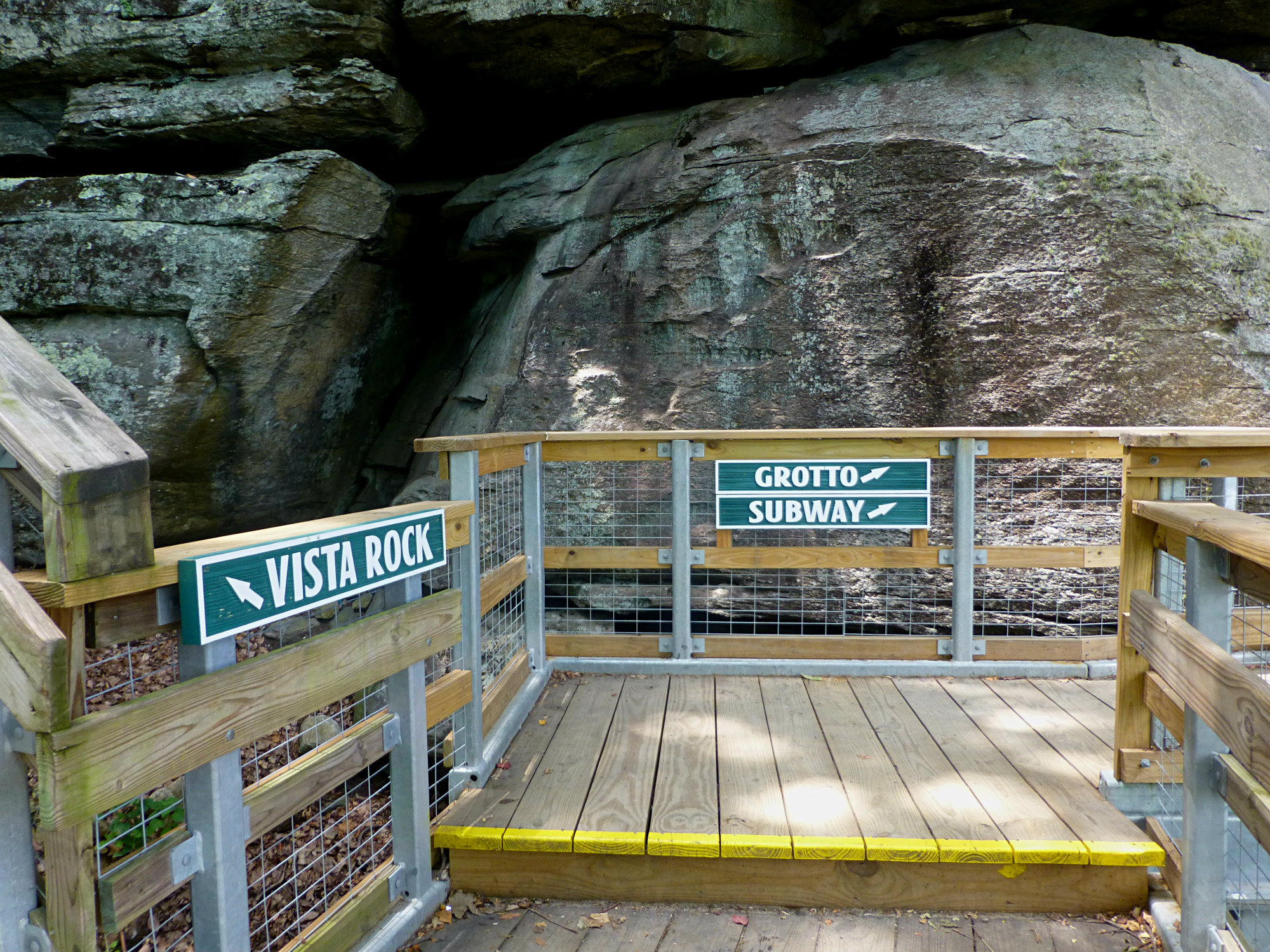 Signs lead to scenic options on the Outcroppings Trail 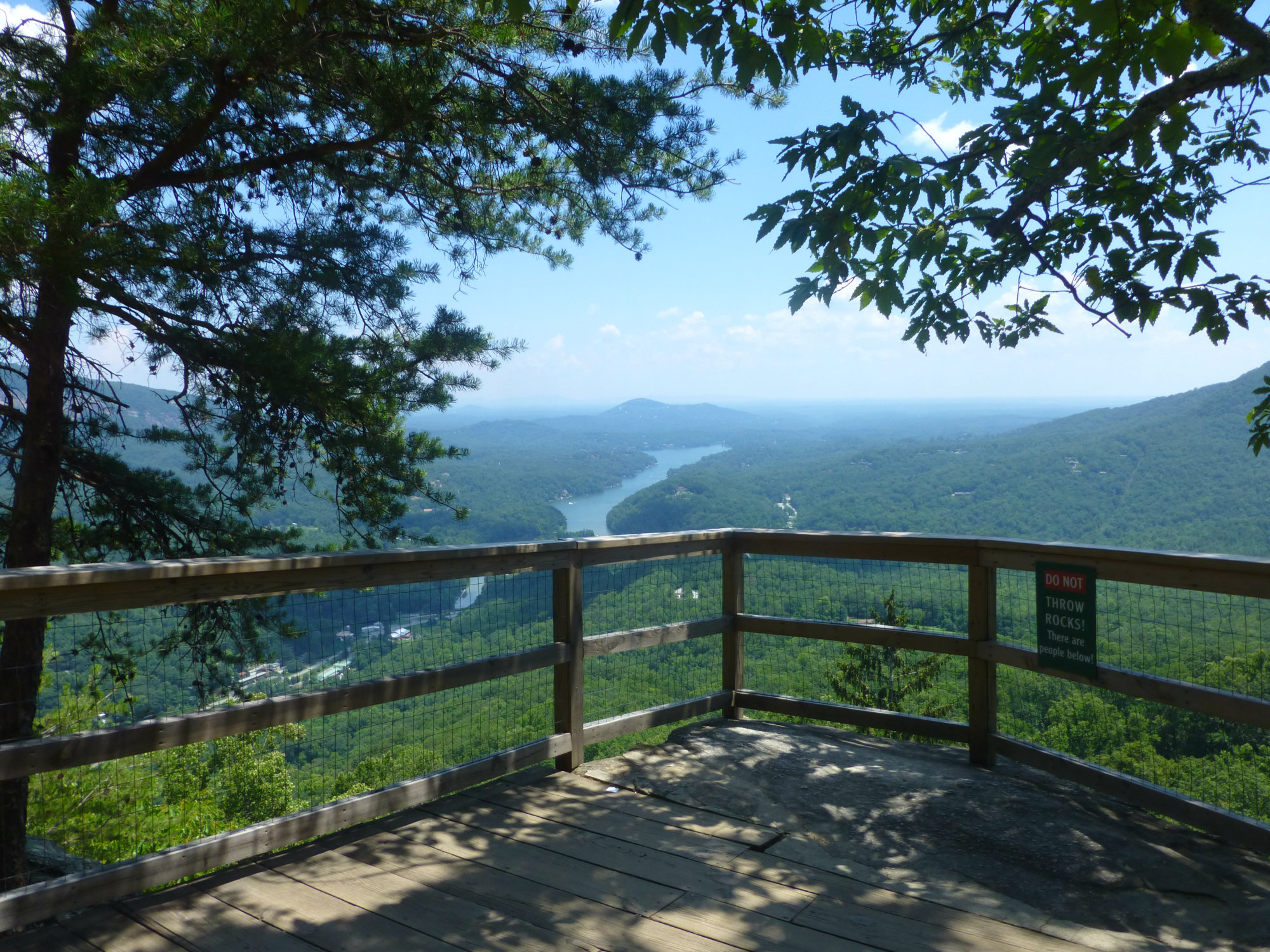 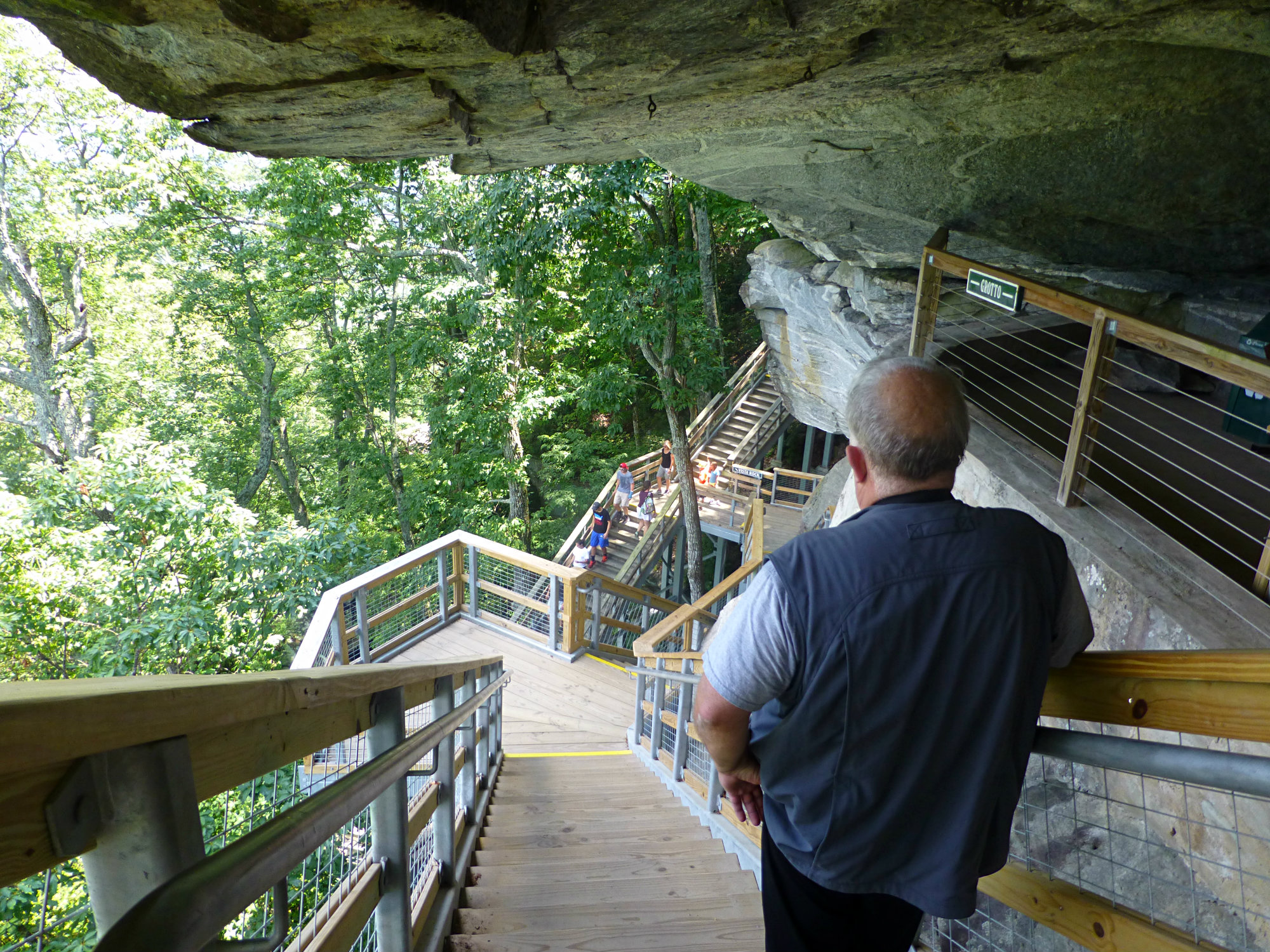 The “Grotto” on the Outcroppings Trail at Chimney Rock (left), created by the rock splitting at a natural joint

Before you know it, you’ll be right there under Chimney Rock and it’s just a few more stairs to the top! We especially love the following photo because the little tree on the rock seems to be cheering everyone on to the top. 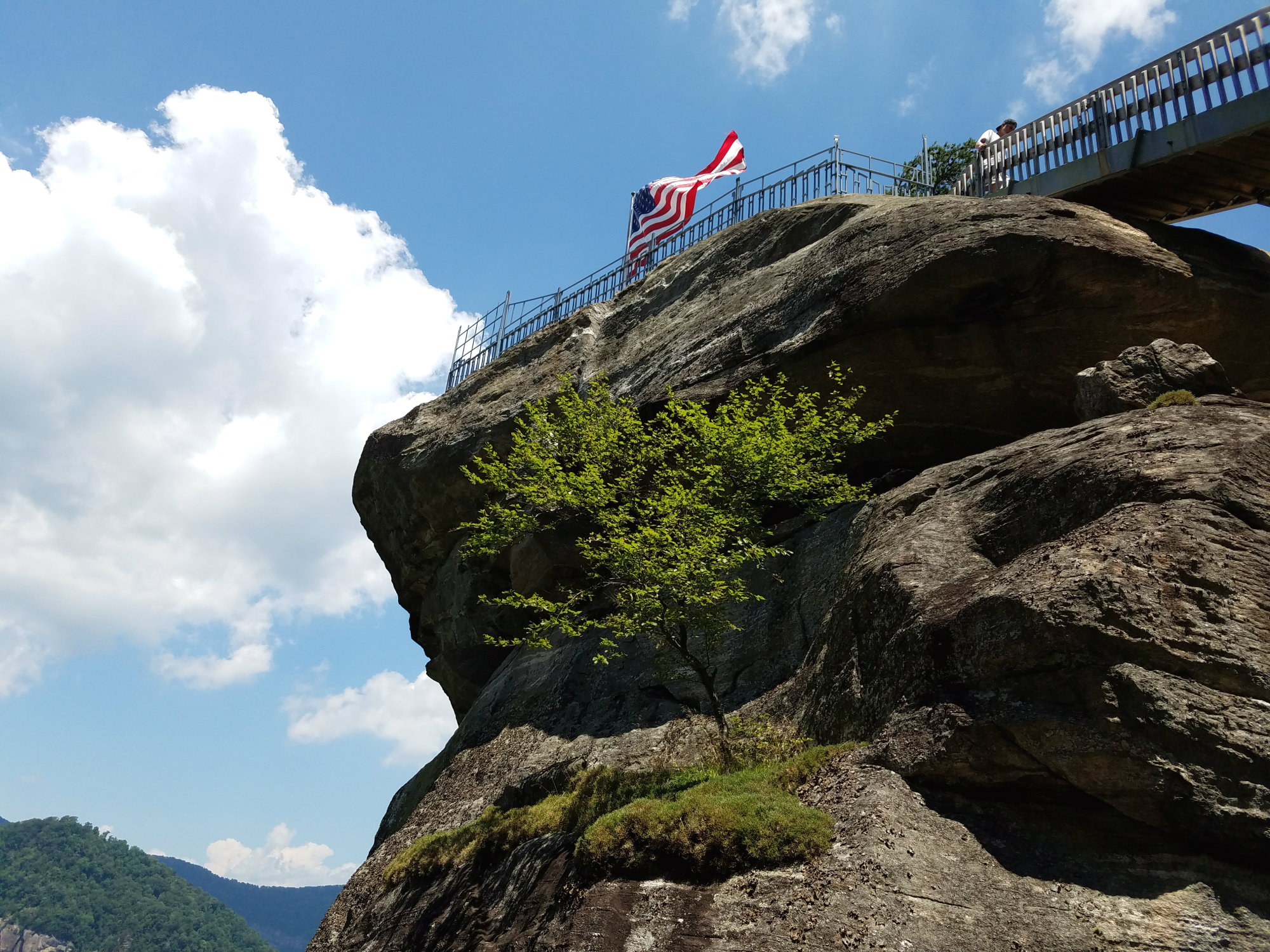 We hope that little tree is there for many, many years to come 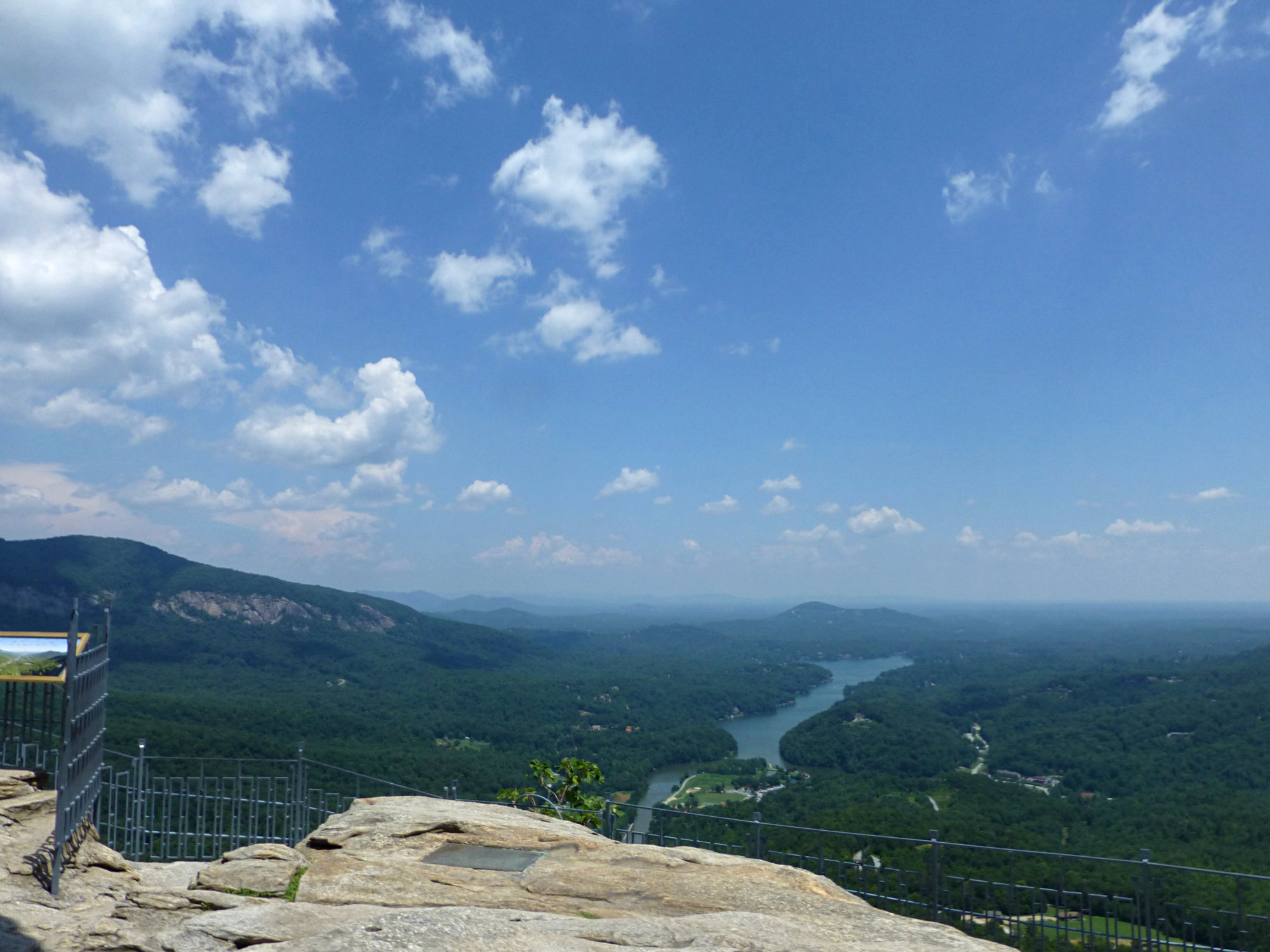 Made it to the top! This view is very much worth the climb.

Stay a few minutes at the top of Chimney Rock admiring the expansive views of Hickory Nut Gorge and you’ll be ready to begin the journey back down. 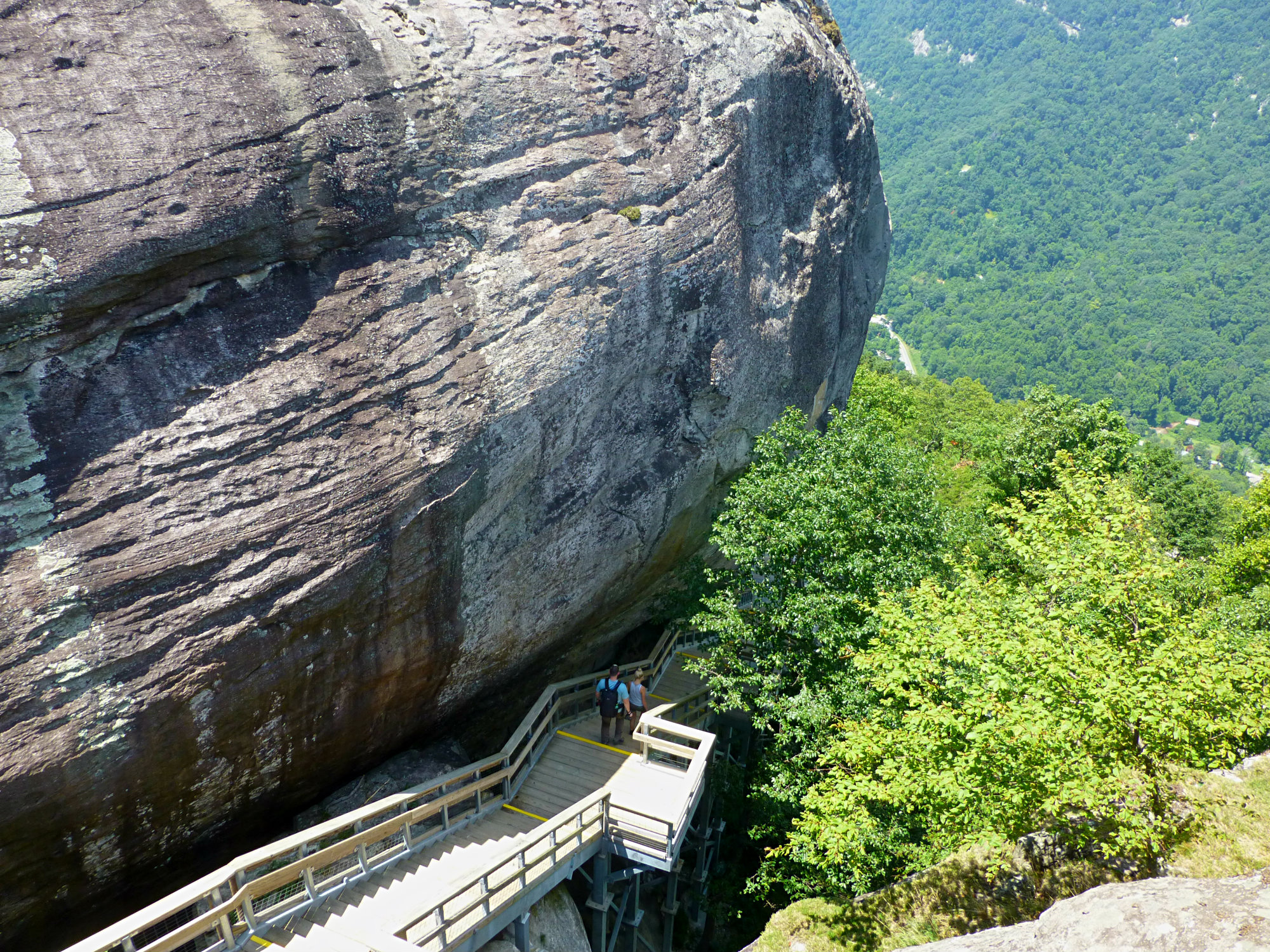 The view of the stairs from Chimney Rock. Well-constructed, the Outcroppings Trail is a great improvement to the park!

Of course, the Outcroppings Trail is not the only trail option at Chimney Rock. Here are some others to consider: