For our final month in this year’s 12 Months of Birding at the Inn series on our blog, we feature a bird that loves the forest just as much as we do: The Broad-winged Hawk. 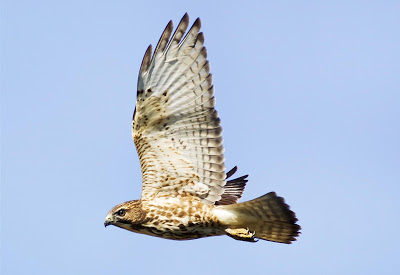 We didn’t have a chance to feature the Broad-winged Hawk in the summertime when they make Pisgah National Forest their home, so we’re closing out the year with a nod to this special bird. 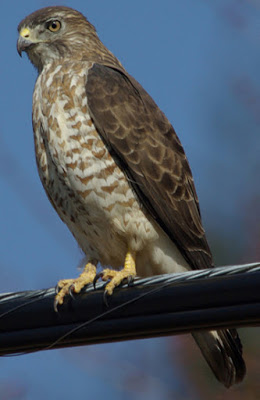 Broad-winged hawks are known for their long distance migrations, flying
thousands of miles in huge numbers to their winter abodes in southern
Mexico, Central America and South America. We’re glad to welcome them
back each summer. Choosing the forest for their breeding grounds, we will typically start noticing Broad-winged Hawks in late springtime. Listen for the call of the Broad-winged Hawk, which sounds like a loud single-pitch whistle. The Cornell Lab of Ornithology describes the call this way:

“Broad-winged Hawks give a plaintive, high-pitched whistle that lasts 2–4
seconds, with a short first note and a long second note: kee-eee.
The male’s call is an octave higher in pitch than the female’s. They
give this call on the nest and in flight throughout the year.”

We hope you’ve enjoyed this year of birding at the Inn on Mill Creek! Our 2016 12 Months of Birding at the Inn series begins in January with a yellow-eyed songbird. Can you guess what it is?